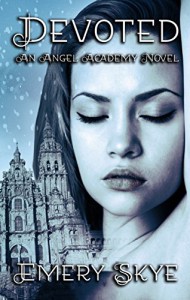 At first it felt slow to start and then I was like I read this story before ,but I realized Its similar to Vampire Academy.  I am by no means saying that the similarity is bad. I enjoyed reading the Vampire Academy series a lot.

Now instead of Rose you have Anna a noviate in an Academy that is a secret school for angels.  She is there to become a Warrior angel. Like Rose she is very protective over someone. Her sister Amalie. She does whatever she can to protect Amalie from, well, everything.   Theres something ominous going on around the world at other Angel Academies. One by one noviates are disappearing.   Reinforcements were sent in to help protect the angels at Hope Academy. Including Legite Deror. Deror is handsome, strong  and a mystery.  He picks Anna constantly for demonstration in the class he teaches and continuously kicks her butt.   One second he seems to be upset at Anna or avoiding her and the next he is rescuing her and sticking up for her. Amalies boyfriend goes missing a few noviates ( Anna, Amalie and their frenemy) go to the Dark World to go and rescue him,

Anna is likable and towards the end is kind of kick ass but still vulnerable. I enjoyed reading the hot and cold feelings with her and Deror. Also seeing how she is protective of her younger sister but still gets pissed at her when her sister fucks up was nice to witness because honestly younger siblings are a pain in the butt, but you got to love them and want whats best for them.  Seeing her come into her own and finding out what is happening with her was great to read about. She seems a little more hot headed than the other angels.

I really liked reading about the Dark World in the flashbacks and when they actually go there. The descriptions of the demons and fallen where, even though the demons were grotesques sounding, done thoroughly and with a lot of detail that you could envision them.

As for bad things there were a few grammatical errors but honestly nothing to turn your nose up at. It doesn’t take from the reading experience.  And you have to just power through some of the first part its a lot of description of the politics and her Academy classes, but most first books in series are like that.

I would recommend this to anyone who likes reading about angels and anyone who read Vampire Academy and was like damn I wish that series didn’t end. This is a great story with  angels, demons, fallen angels, romance and action.  I’m looking forward to reading the next book to find out what happens with Legite Deror and Anna also is there another trip to the Dark World? Will we meet Anna and Amalie’s Warrior mother? Who is Anna’s father?